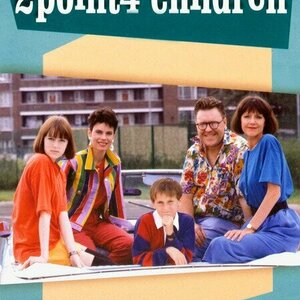 2point4 Children is a BBC television sitcom that was created and written by Andrew Marshall. It follows the lives of the Porters; a seemingly average family whose world is frequently turned upside-down, due to bad luck and bizarre occurrence. The show was originally broadcast on BBC One from 1991 to 1999, and ran for eight series, concluding with 30 December 1999 special episode, "The Millennium Experience". The September 2000 death from cancer of one of the lead actors, Gary Olsen, who played the father, ended the possibility of any subsequent specials. The show is now repeated regularly in the UK on Gold and Drama, and in Australia on UKTV. The title of the show refers to the once average size of a UK family. There are two children in the Porter family, however Andrew Marshall has indicated that the father, Ben, could be considered almost another child, making up the "point four".