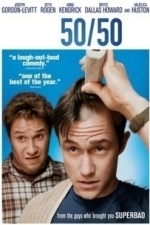 Adam Lerner (Joseph Gordon-Levitt) has always tried to take good care of his health, so it comes as a cruel surprise when he learns that he has malignant tumors along his spine. His doctor gives him a 50/50 chance of survival, but Adam tries to remain upbeat, though his mother (Anjelica Huston) and his friend Kyle (Seth Rogen), react badly to the news. Adam starts seeing a therapist (Anna Kendrick), but their relationship threatens to cross the boundary between doctor and patient.