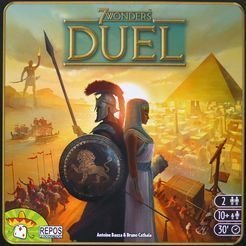 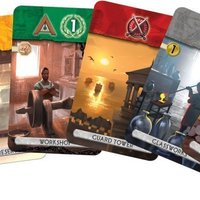 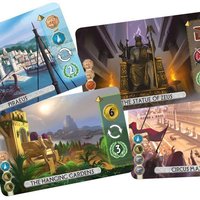 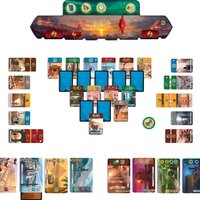 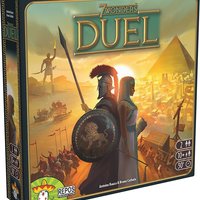 One of the most celebrated games in the world can now be experienced in a two-player arena. 7 Wonders Duel takes the game play and excitement of the original and adapts it for one-on-one battles. Take control of your civilization and decide to invest in science, military or prestige. Two new ways to win will keep you on your toes and watching every move your opponent makes. If you fail to build defenses your capital city may be destroyed, but ignore technology and your people may be left in the dark ages. It's a constant tug of war. 7 Wonders Duel is an exciting new way to play the game that took the world by storm. Great for both fans of the original and those new to the hobby.

Each player starts with four wonder cards, and the construction of a wonder provides its owner with a special ability. Only seven wonders can be built, though, so one player will end up short.

Players can purchase resources at any time from the bank, or they can gain cards during the game that provide them with resources for future building; as you acquire resources, the cost for those particular resources increases for your opponent, representing your dominance in this area.

A player can win 7 Wonders Duel in one of three ways: each time you acquire a military card, you advance the military marker toward your opponent's capital, giving you a bonus at certain positions; if you reach the opponent's capital, you win the game immediately; similarly, if you acquire any six of seven different scientific symbols, you achieve scientific dominance and win immediately; if none of these situations occurs, then the player with the most points at the end of the game wins.

Images And Data Courtesy Of: Repos Production.
This content (including text, images, videos and other media) is published and used in accordance with Fair Use.