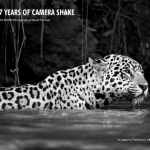 As humans, we are drawn to predators like no other group of animals. They are the epitome of form and function, and have a level of perfection that we revere. In 2009, wildlife expert, conservationist and photographer David Plummer was diagnosed with Parkinson's disease. Rather than let it defeat him, he was galvanised to grab life by the horns and achieve the perfect wildlife shot. Over the next seven years, he did much more than that. The result is this breathtaking collection of over 200 of his best and favourite photographs of exotic and wild animals intheir natural habitats. To capture them, David travelled to some of the most remote andstunning locations across the world, from Africa to India to the Galapagos Islands and back to his native England. 7 Years of Camera Shake showcases seven years of immersive and illuminating photography: of predators on the prowl, of prey in the clutches of death, of the inexplicable synchronisation of nature, of the beautiful relationship between mother and child, and much, much more. Plummer's work has been featured in wildlife publications and national and international press, and now the work he has produced since his diagnosis is showcased here, accompanied by his thoughts and anecdotes on how he achieved each perfect shot.