A Hero for the Empire (The Dragon's Bidding #1) 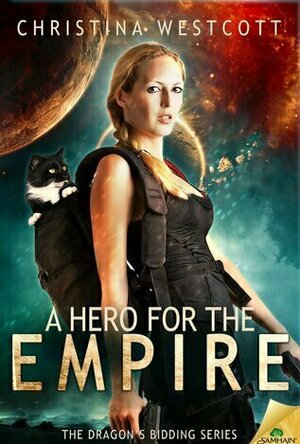 They want to save the world—starting with each other.

Commander Kimber FitzWarren is running on borrowed time. The cybernetic augmentations that give her superhuman strength and speed have also shortened her life. The success of her next mission is imperative, not only to save her Empire, but because this operation could be her last.

She and a cabal of other idealistic officers are plotting to topple the corrupt Imperial government. The key to placing missing military legend Arianne Ransahov on the throne lies with the one man who can find her, mercenary Wolf Youngblood.

Having just survived an Imperial assassination attempt, Wolf is understandably on edge when Fitz shows up in his bedroom at 0-dark-30. Except she isn’t there to kill him, but to plead for his help. Help he’s reluctant to give—until another assassin pushes the issue.

Pursued by Imperial forces, left with no one to depend on but each other, a bond begins to form that even their secrets can’t destroy. But before they can explore what’s left of their future, they have to survive the mission.

Warning: Space is no place to go it alone. We recommend taking along a telepathic cat, an immortal mercenary, and a cybernetically augmented Imperial SpecOps agent. You never know what kind of trouble you’ll run into…