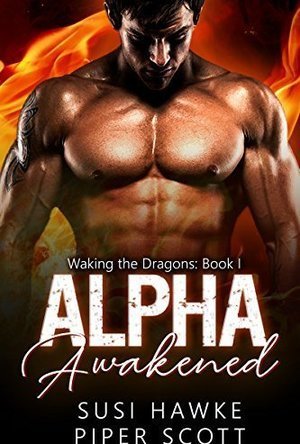 After thousands of years, they’re back…

Awkward outcast omega Emery Jones isn’t expecting to find anything more than adventure when he leaves his favorite hiking path and follows a strange series of markers through the woods… and he’s certainly not expecting to come face to face with the most gorgeous man he’s ever seen. He’s instantly smitten, but there’s one problem—his dream guy insists that he’s a dragon prince from another time, and Emery is his fated mate!

After thousands of years in stasis, Coryphaeus of Novis, the draconian Crown Prince, has been awakened by a kiss from his fated mate. But when the shy little omega denies his draconian heritage and tells Cory that dragons are nothing more than fairytales, Cory knows that the world isn’t as he remembers it. The dragons that once ruled the world are gone.

It’s too bad the threat they previously faced hasn’t gone extinct, too…

Alpha Awakened is the first book in the Waking the Dragons series and features literally rock-hard hunks, a mom who knows way too much, a perilous threat that transcends time, and a HEA just as legendary as the dragons in it. This 52k book contains mpreg and is 18+ only… did you really expect anything less from Susi Hawke and Piper Scott?

Let our dragons sweep you off your feet… and into the starry night skies of Eureka Springs!