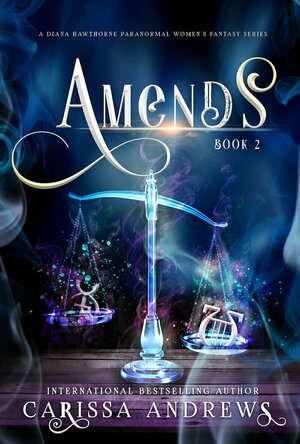 For as psychic as she is, shit goes sideways far too often around Diana Hawthorne.

Diana now has everything she ever wanted–her memories, and the soul mate she didn’t realize she was missing. There’s just one problem… the old gods expect her to make amends for her absence. And her work starts now.

But time lost at the oracle isn’t the only thing she has to atone for. Her friend Demetri was stripped of his powers–and it was all her fault. If she could just set things right, she’d feel a whole lot better about moving forward. Unfortunately, Demetri wants nothing to do with her and knows exactly how to keep her out of his head.

To make matters worse, in the age of social media, Diana’s abilities have gone viral. People from all over the world are clambering to get on her books. One case, in particular, hits her radar and despite herself, she can’t shake it. A 14-year-old boy is wrapped up with a deadly governmental agency and he’s scared to death. And he should be–they want to weaponize his power.

Torn between what was and what is, Diana struggles to fully embrace who she’s becoming. Will she be able to help Demitri and make things right? Or will her new role mean leaving the past behind?

Calling fans of KF Breene, Shannon Mayer, and Shayne Silvers! If you like snarky-fun humor, gripping supernatural scenes, and twists that leave you spellbound — then you will LOVE Carissa Andrews’ world built especially for Diana Hawthorne.

Main Image Courtesy: Amazon.
Images And Data Courtesy Of: Author Revolution LLC.
This content (including text, images, videos and other media) is published and used in accordance with Fair Use.