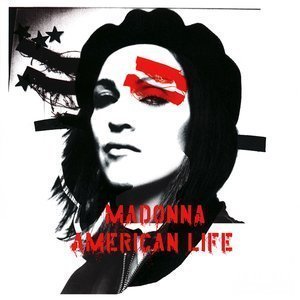 American Life is the ninth studio album by American singer and songwriter Madonna. It was first released on April 21, 2003, by Maverick Records and Warner Bros. Records. The album, produced in its entirety by Madonna and Mirwais Ahmadzaï, features references to many parts of American culture. The album is a concept album, with recurring themes of the American Dream and materialism. These themes reject the reputation Madonna held in the 1980s, earned by songs such as her worldwide hit "Material Girl" (1985). The album contains folk and folktronica music, as well as influences of acoustic music on many tracks.

American Life received mixed reviews from music critics, with responses noting its consistency, but general responses called the record "about Madonna" and found it confusing. The album peaked at number one in fourteen countries. The Recording Industry Association of America (RIAA) and British Phonographic Industry (BPI) both certified it platinum in recognition of one million shipments in the United States, and 300,000 shipments in the United Kingdom, respectively. The album became the 32nd-best-selling album of 2003 and has sold five million copies to date. American Life garnered two nominations at the 46th Grammy Awards in 2004.

Four singles were released from the album. The first, the title track, was released to a generally negative critical reception, with Blender naming it the ninth worst song of all time. It charted at number 37 in the US while it entered the top ten in most countries, peaking at number two in the United Kingdom. A controversial music video was pulled after scenes of war and violence were criticized which led to an edited version being released. Its following single, "Hollywood", became her first single not to chart on the Billboard Hot 100 since 1983. "Nothing Fails" and "Love Profusion", the third and fourth singles respectively, featured a lack of promotion resulting in a poor commercial performance. Despite it, both peaked at number one in Spain.

Madonna promoted the album during a small promotional tour for the album in April and May 2003. At the 2003 MTV Video Music Awards, she performed alongside Britney Spears, Christina Aguilera and Missy Elliott a medley of "Like a Virgin" and "Hollywood" and engaged in open-mouth kissing with Aguilera and Spears gaining great controversy and publicity. American Life was supported by Madonna's sixth concert tour, the Re-Invention World Tour, which was the highest grossing tour of 2004 earning $125 million. The tour was chronicled in a documentary titled I'm Going to Tell You a Secret, which led to Madonna's first live album of the same name.