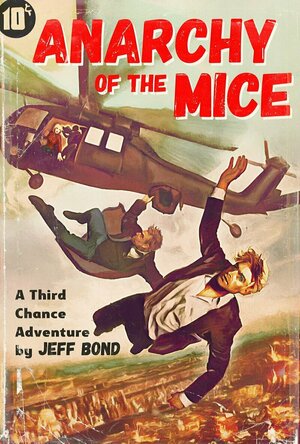 From Jeff Bond, author of Blackquest 40 and The Pinebox Vendetta, comes Anarchy of the Mice, book one in an epic new series starring Quaid Rafferty, Durwood Oak Jones, and Molly McGill: the trio of freelance operatives known collectively as Third Chance Enterprises.

How far could society fall without data? Account balances, property lines, government ID records — if it all vanished, if everyone’s scorecard reset to zero, how might the world look?

The Blind Mice are going to show us.

Molly McGill is fighting it. Her teenage son has come downstairs in a T-shirt from these “hacktivists” dominating the news. Her daughter’s bus is canceled — too many stoplights out — and school is in the opposite direction of the temp job she’s supposed to be starting this morning. She is twice-divorced; her P.I. business, McGill Investigators, is on the rocks; what kind of life is this for a woman a mere twelve credit-hours shy of her PhD?

Then the doorbell rings.

It’s Quaid Rafferty, the charming — but disgraced — former governor of Massachusetts, and his plainspoken partner, Durwood Oak Jones. The guys have an assignment for Molly. It sounds risky, but the pay sure beats switchboard work.

They need her to infiltrate the Blind Mice.

Danger, romance, intrigue, action for miles — whatever you read, Anarchy of the Mice is coming for you.

Main Image Courtesy: Amazon.
Images And Data Courtesy Of: Jeff Bond Books.
This content (including text, images, videos and other media) is published and used in accordance with Fair Use.