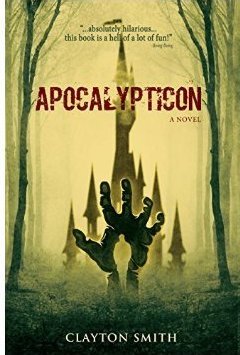 One second, everyone was going about their own business, and the next, Jamaican gas bombs shaped like monkeys were falling from the sky. Now, three years later, Patrick Deen's world is all collapsing skyscrapers, bloodthirsty maniacs, and a daily fight for survival.

Supplies are running low, and Patrick can't hold out much longer. But before he goes, he's going to cross one last item off his bucket list.

Apocalypticon is a hilarious and horrifying odyssey through post-apocalyptic America...a story about a raucous road trip through the Midwest and Deep South that's full of danger and disaster as fellow survivors Patrick and Ben encounter a slew of odd characters, from zombie politicians and deranged survivalists to madcap monks and a weird old fortune teller who doesn't have a lot of good news.

And it looks like Patrick may be hiding the real reason for their mission to the Magic Kingdom...

Never before has there been such an incredible and enjoyable story of survival, friendship, machetes, and pudding.

Images And Data Courtesy Of: Dapper Press.
This content (including text, images, videos and other media) is published and used in accordance with Fair Use.