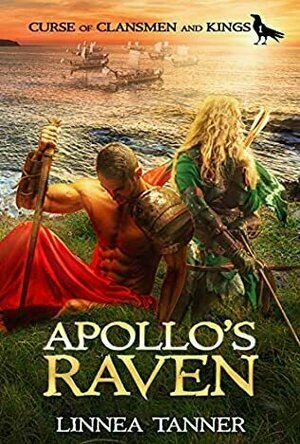 A Celtic warrior princess is torn between her forbidden love for the enemy and duty to her people.

AWARD-WINNING APOLLO’S RAVEN sweeps you into an epic Celtic tale of forbidden love, mythological adventure, and political intrigue in Ancient Rome and Britannia. In 24 AD British kings hand-picked by Rome to rule are fighting each other for power. King Amren’s former queen, a powerful Druid, has cast a curse that Blood Wolf and the Raven will rise and destroy him. The king’s daughter, Catrin, learns to her dismay that she is the Raven and her banished half-brother is Blood Wolf. Trained as a warrior, Catrin must find a way to break the curse, but she is torn between her forbidden love for her father’s enemy, Marcellus, and loyalty to her people. She must summon the magic of the Ancient Druids to alter the dark prophecy that threatens the fates of everyone in her kingdom.

Will Catrin overcome and eradicate the ancient curse. Will she be able to embrace her for-bidden love for Marcellus? Will she cease the war between Blood Wolf and King Amren and save her kingdom?

Main Image Courtesy: Amazon.
Images And Data Courtesy Of: Apollo Raven Publisher, LLC.
This content (including text, images, videos and other media) is published and used in accordance with Fair Use.