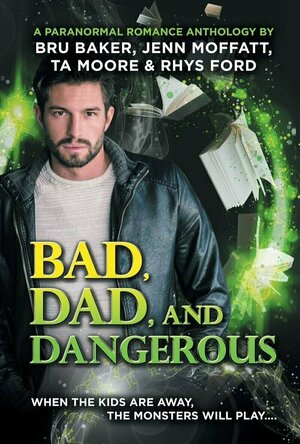 Bad, Dad, and Dangerous Anthology
When the kids are away, the monsters will play.

School’s out for summer, and these dads are ready to ship their kids off to camp. Not just because their kids are monsters—whose aren’t?—but because they’re ready for some alone time to let their hair down and their fangs out. You see, not only are the kids monsters—their dads are too.

Even the most dangerous of creatures has a soft spot. These bad, dangerous dads love their kids to death, but they need romance.

Every year, for a few short weeks, these hot men with a little extra in their blood get to be who they truly are. And this year, life has a surprise for them. Whether they be mage, shifter, vampire, or changeling, these heartbreakingly handsome dads might be looking to tear up the town… but they’ll end up falling in love. All it takes is the right man to bring them to their knees.

Monster Hall Pass by Bru Baker
White-collar dad Hugh Whitby dotes on his adopted daughter, but she’s away at camp. Now it's time let the vampiric urges he so tightly controls run wild and take advantage of his monster hall pass to feed on criminals. But when fae prince Rykoff of Harlow interrupts Hugh feeding, he catches Hugh’s daughter’s scent and vows to avenge the fae youngling he believes Hugh has captured.

Hugh had no idea his daughter’s teacher wasn’t human, and it rocks the foundation of his world. He must convince Rykoff that the fae youngling in question is safe with her vampire dad and can prosper in the mortal realm—or risk losing her forever.

Kismet & Cadavers by Jenn Moffatt
Thomas Anders is prepared for two weeks of alone time, or as alone as he can be living with his daughter’s sentient undead cat, running the family occult shop, and keeping San Diego safe from the strange and supernatural. What he doesn’t expect is for KJ Beshter to arrive in his shop bearing a gift card Thomas’s daughter cast a spell on.

Thomas has met her handsome magic-sensitive teacher before, but now would be perfect timing for them to get to know one another better…

If something wicked didn’t want to sink its claws into KJ too….

Elf Shot by TA Moore
All Conri wanted was to drop his kid off at Changeling camp, find the nearest halfway nice hotel, and enjoy a week of uncomplicated debauchery. It should be simple. Instead , Conri will need all the help he can get—even if it does come from a distractingly pretty, tightly wound Iron Door agent who doesn’t trust Conri to be on the right side.

When a local girl disappears, the neighborhood quickly lays blame at the well-guarded gates of the camp. With his son incriminated, a mystery to solve, and a malevolent pocket of the Otherworld to navigate, Conri will need all the help he can get—even if it does come from a distractingly pretty, tightly wound Iron Door agent who doesn’t trust Conri to be on the right side.

Wolf At First Sight (A Wayward Wolves Novella) by Rhys Ford
SFPD Lieutenant Joseph Zanetti has spent years protecting his city, and from the looks of St. Connal’s Pub and its bad-boy owner, Levi Keller, the place is a hotspot for trouble and violence. Joe’s problem? Levi is delectably hot, with secrets Joe can’t wait to dig into.

As a Peacekeeper for paranormals, wolf shifter Levi doesn’t need the complication of a hot cop sniffing around his pub when he’s just sent his teen son off to summer camp. He’s busy brokering a peace agreement between two warring factions. When Joe stumbles into Levi’s world, both plunge into a situation neither one of them was ready for—falling in love.

Main Image Courtesy: Amazon.
Images And Data Courtesy Of: Dreamspinner Press.
This content (including text, images, videos and other media) is published and used in accordance with Fair Use.