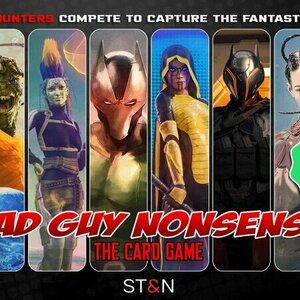 Bad Guy Nonsense is a unique strategic family card game where you compete to capture fantastical BAD GUYS. It features wild pop culture-rich artwork on large OVERSIZED glossy linen cards making it unlike anything else that has come before.

You’ll need all your wits and gaming skills to employ BOUNTY HUNTERS, BANDITS, BURGLARS, HEROES, MONSTERS, and a WITCH to capture high-value BAD GUY targets. Battle your opponent to steal their captures while defending your own.

The goal of the game is to score points by capturing the most Bad Guy Cards before the deck runs out. You'll need to get the right card combos to make a capture and score points. The higher the value target, the harder the combo is to acquire. You make captures and score points while the SPECIAL CARDS (HEROES, BURGLAR, BANDIT, WITCH, MONSTER) all cause massive havoc between you and your opponent(s). The game gets intense as each turn passes because once the deck runs out, the game is over. When this happens, uncaptured BAD GUYS count as negative points. So you'll want to start discarding them when the deck runs low! However, your opponent(s) may be able to pick them up and use it against you... It's impossible to tell how many turns are left as you don't know how many cards the next player will play!