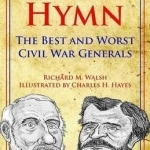 Want to know which general was the most respected by soldiers on both sides? Or why George Thomas is considered the best combat general of the war? Read historian Richard M Walsh's entertaining book! In it, he reveals the strengths and weaknesses of the Civil War's top generals. Find out why Nathan Bedford Forrest and William T Sherman are both hated and respected. Discover why Stonewall Jackson was considered the best combat leader in the Confederacy and why George McClellan was called "Little Napoleon". Walsh includes citizen soldiers Patrick Cleburne and Joshua Lawrence Chamberlain. Portraits scattered throughout add to the fun of this educational read.

Images And Data Courtesy Of: Pelican Publishing Co.
This content (including text, images, videos and other media) is published and used in accordance with Fair Use.