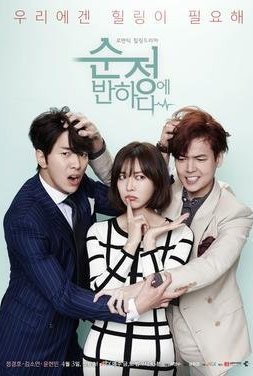 Min Ho is a cold-blooded corporate raider who takes no prisoners. He is a scoundrel investment banker for Gold Investment, seemingly the world’s largest financial service firm. As a cynical, self-defensive, suspicious sociopath, he wears down people with his tenacity and takes advantage of them with his delusions of grandeur. However, Min Ho has his own story of how he became evil - it was because of his uncle’s betrayal. His father was overthrown by his uncle and it caused his family to hit bottom. As Min Ho vows to get revenge, he meets Soon Jung, his father’s former secretary who betrayed him and now works for his uncle. One day, he has a heart attack and is taken to a hospital. He miraculously survives his heart attack after undergoing a heart transplant. His heart is actually from Dong Wook, a young detective and Soon Jung’s fiancé who suffered from brain damage from a mysterious car accident. After receiving a new life thanks to the new heart, he is no longer the cold and callous person that he has been and undergoes a profound change to his personality, talking differently and warming up people. But he still pursues his plan to get revenge on his uncle even though his emotions get in the way at times. He gradually learns the meaning of happiness when he finds Soon Jung, whom he wants to cherish and protect. His heart becomes tender and his eyes swell with tears when as he works with her. He falls in love with her without realizing it. (Wikipedia)

Images And Data Courtesy Of: jTBC.
This content (including text, images, videos and other media) is published and used in accordance with Fair Use.