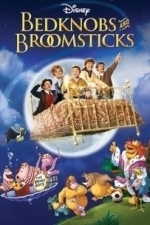 During the Battle of Britain, Miss Eglantine Price (Angela Lansbury), a cunning witch-in-training, decides to use her supernatural powers to defeat the Nazi menace. She sets out to accomplish this task with the aid of three inventive children who have been evacuated from the London Blitz. Joined by Emelius Brown (David Tomlinson), the head of Miss Price's witchcraft training correspondence school, the crew uses an enchanted bed to travel into a fantasy land and foil encroaching German troops.