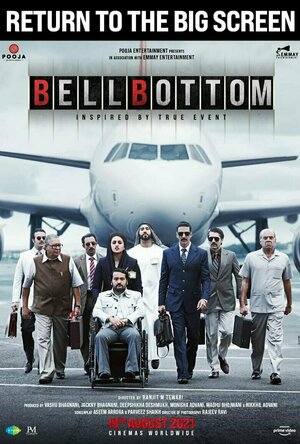 Bell Bottom is a 2021 Indian Hindi-language action thriller fillm directed by Ranjit M Tewari. The film is written by Aseem Arrora and Parveez Sheikh, with production by Vashu Bhagnani, Jackky Bhagnani, Deepshikha Deshmukh and Nikkhil Advani under their respective banners Pooja Entertainment and Emmay Entertainment. It stars Akshay Kumar as the lead character, with Lara Dutta, Vaani Kapoor and Huma Qureshi in other prominent roles. Bell Bottom is inspired from real life hijacking events in India by Khalistani separatists during the 1980s, such as the Indian Airlines Flight 423, 405 and 421 hijackings.

Main Image Courtesy: Pooja Entertainment.
This content (including text, images, videos and other media) is published and used in accordance with Fair Use.