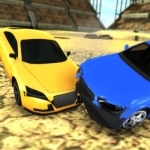 Race, drive to survive, smash and crash all the cars! Yours and opponent's - doesn't matter as long as you can do maximum damage possible. Sounds fun? Try the Car Crash Simulator and see how you like making extreme destruction in exciting little car wreck wars. It's a game related to demolition derby and car war games yet quite unique by itself.

It's something NOT recommend doing in real life, but hey - that's why games exist, right?

So, what can you expect?
"Survival" mode in which you're collecting coins for in game cash by racing around the level. Avoid AI cars as they're nearly indestructible. There's a 5 minute limit for this derby racing mode. Can you reach the limit?

"Tank Hunt" mode - in which you're shooting down other cars with a tank. Awesome! Right? In this mode you're the indestructible one and since it's only for fun - you need to hunt down other cars and crash them. Enjoy the great demolition effects when you hit cars with a projectile. Cars can be run over or shot down with a powerful auto-aim turret gun. Also, 10 minute limit, so see how much can you crush during that time.

"Crash Arena" mode is even more fun: it's you against 3-9 AI opponents at same time in a classic demolition derby racing battle. Who will survive in this extreme wreckage? This mode is total war! You can even set how many opponents you want to take at same time. I'd bet on you but we can never know ;) There's many ways you can outsmart AI opponents, but make no mistake - they are set to hunt you down and will not stop until demolished.

Mode called "Tank Run" lets you collect coins for cash, but there's many challenges in doing so. They're all around the maps, and there's enemy cars you need to avoid plus the TANK which is after you. Yep, it's shooting and at most you could take 3 hits, perhaps less if direct, so try not to get hit :)

Car physics is realistic enough to ensure that simulation of crashes and destruction is done really nice - you can damage car slightly or a lot, and make its part fall off and fly around if you bump the car hard enough. Fun fun.

You have 12 cars to play with and 11 maps to battle on, so enjoy demolition wars and good luck!
Download today, have fun and let me know your thoughts about game in the reviews.

Images And Data Courtesy Of: Romano Zagorscak.
This content (including text, images, videos and other media) is published and used in accordance with Fair Use.