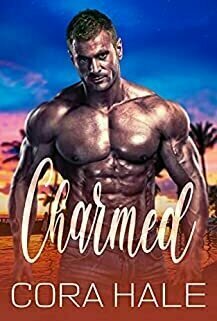 Dr. Selena Evans just wanted to get away for a while, so she could get over Matthew and the way he tore her heart in two before slamming the front door in her face after four years of what she thought would be forever.
Crete seemed the perfect destination for a single mom to unwind a bit by herself. Something about Greece with all the beaches and old history had always called to something inside of her. She could never afford the trip before, what with every single penny going for her education, loans on her house, and John’s upbringing. Things changed, however, as soon as she finished her Ph.D. She can barely wait to get a hell of a tan, cruise all the clubs, and get all the hunks.
When she finally steps foot inside her room at the famously luxurious Cretan Aetos Resort, something pings red flags all around, and she pays the price for ignoring them real soon, when the actual owner catches her gorging herself in his food and champagne.

Christos Aetos doesn’t have time for anything that isn’t his kids, his family, and his job. Since the ugly divorce more than a year ago, he’s stayed away from women. He certainly doesn’t have time for one more attempt from Nik to get him to hook up with one of his girls. So, imagine his reaction when he finally gets to his personal apartment in his own bloody resort to find one of them making herself at home, stuffing herself with the chocolate cake he’d personally bought for when Tati and Egan arrived the next morning. It also doesn’t help that the woman was practically naked, with miles of bronze skin on display, legs that wouldn’t bloody quit, and those mesmerizing silver eyes.
She was feisty, that one. Christos can’t get her out of his head. Sad that he’ll never see her again.
At least that was what he thought before the perfect opportunity lands straight on his lap to go after her and make a proposition she can’t possibly refuse.

Will the vulnerable, surprisingly sweet billionaire CEO, and the headstrong psychologist learn to get along, or will they set fire to an already scorching Cretan summer?

Who knows? Maybe it will be both.

Author’s Note:
Two broken hearts learning to open up to love again, a nosy Greek clan, long dates, from beach parties to wine festivals, and characters that aren’t afraid to communicate. Charmed is a steamy contemporary romance, filled with sexual tension that will make you squirm. It’s a standalone with a guaranteed HEA.