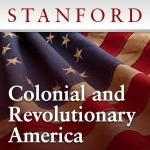 This course covers the opening segment of the traditional American history survey. Its major themes are the character of colonial society; the origins and consequences of the American Revolution, from the Stamp Act controversy to the adoption of the Federal Constitution; the impact of the Revolution on the general population and culture; and (implicitly) the long-term significance of the social and political history of this era for our conceptions of American nationhood, society, and citizenship.

Images And Data Courtesy Of: Stanford University.
This content (including text, images, videos and other media) is published and used in accordance with Fair Use.