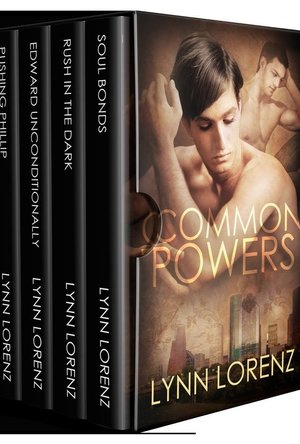 It’s not how big the power, it’s how you use it.

Mitchell’s tired of one night stands and casual encounters.

Sammi is a runaway sex slave who’ll do anything to stay free.

When they meet in a bar, Mitchell can’t believe his luck. Sammi is sex on two legs and seems to know just what Mitchell wants from a lover. But Sammi’s owner Donovan isn’t going to let him go so easily. He’s prepared to destroy anyone who stands in his way to get back his prized slave.

Is the bond between Mitchell and Sammi strong enough to stand up against the damage Donovan inflicts on their lives, or will it shatter?

Rush in the Dark

Rush is so deep in the closet he can’t find the door, but meeting Brian might give him the courage to step out of it.

When Brian and Rush meet in a dark alley, sparks fly. The attraction is fast and hard, but Rush is a rancher with a reputation to uphold and Brian is out and open.

Both men have secrets, including the small powers they each have, and a relationship means they might have to share. It would require Rush coming out of his closet and putting his ranch and his friendships with the people around him at risk.

For Brian, it means putting his heart on the line for a man who’s afraid of being himself. He’s been down that road before and Brian won’t go back in the closet, not even for Rush.

Each time they’re together, Rush and Brian set the air around them on fire. As they move closer, both are still holding back, still unsure of each other. One of them will have to take the first step or this thing between them will flounder.

For Rush, it’ll take a huge step and a lot of trust to risk his entire life in the small Texas town of Spring Lake. And once he’s out, there’s no going back.

For Brian, his heart isn’t the only thing at risk. If he keeps seeing Rush, he knows he might just lose his life.

When Jack meets Edward at a traffic stop, his world is rocked—and not for the better. Edward is the gayest man he’s ever seen and Spring Lake is a small town just getting comfortable with its own new gay couple, Brian Russell and Rush Weston. Unlike Edward, Rush and Brian are big, strapping, manly men. But manly isn’t what turns Jack on. It’s Edward—everything about the younger man drives Jack wild with desire and the need to control Edward’s wild, impetuous spirit.

For Edward, his attraction to ‘bad boys’ has been his romantic downfall. His heart’s been broken so many times he’s lost count. When he meets Jack, Edward falls for the all-American by-the-book lawman, but finds his attempts rebuffed and his pride severely wounded. Jack’s straight, or at least says he is, but Edward knows that look in Jack’s eyes—he’s seen it before in other men. How can a man so right be so wrong?

Edward tempts Jack beyond anyone he’s ever met and his desire for Edward builds each time he encounters the younger man, until he can no longer deny it or himself. But Edward doesn’t want sex on the side, he wants forever. He wants the fairy tale.

Can Jack give Edward what he wants or will Jack’s fear of being ridiculed for his choice of a partner keep them from their happily ever after?

Jobless, homeless and alone at Christmas—can his new friends keep him from running?

When the guys decide to spend Christmas together at the ranch, it’s going to be a time for catching up with each couple. Rush and Brian are hosting, Edward and Jack will be there and Mitchell and Sammi are coming in from Houston.

When Brian and Rush take Phillip, a newly outed gay man, under their wings, they discover he’s got a power. But this power is one that makes all of them uncomfortable, along with the young man himself as issues of trust arise.

Reader Advisory: These books contain scenes of murder and references to rape, abuse and stalking. They also deal with the sex slave industry and people who are held against their will.

Main Image Courtesy: Website.
Images And Data Courtesy Of: Pride Publishing.
This content (including text, images, videos and other media) is published and used in accordance with Fair Use.