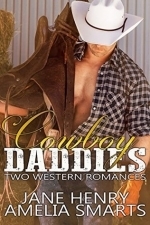 Part One by Amelia Smarts

Eighteen-year-old orphan Abigail Jones has been doing her best to survive while also saving money to put her younger sister through college one day, but when she takes up residence in an abandoned bunkhouse at a ranch she quickly ends up in trouble with the ranch's owner.

After he catches Abigail trespassing and riding his favorite horse without permission, Clay Ashton scolds her thoroughly. He also makes it clear that she'll be coming back to his house for a proper meal, whether she likes it or not, and when the beautiful, sassy girl refuses to accept his charity he doesn't hesitate to take her over his knee for a sound spanking.

Though being punished like a naughty little girl leaves Abigail blushing crimson, she cannot deny her body's reaction to Clay's strict chastisement, and soon enough she is calling him daddy and promising to be good. Over the coming weeks she learns what it means to be guided, corrected, and cared for by a firm but loving daddy. But when her pride causes her to make a terrible mistake, can Clay show her that no matter what she will always be his little girl?

In the three months since she came to live with Abigail and Clay, eighteen-year-old Daisy Jones has grown ever more enthralled by the ranch's tall, ruggedly handsome foreman, Shane Weston. Unfortunately, Shane seems to view her as nothing more than a naughty little girl, and he even threatens to spank her if her irresponsible behavior disrupts Abigail and Clay's wedding.

After Abigail and Clay depart for their honeymoon, Daisy's defiant attitude and constant disobedience finally push Shane too far and he puts her over his knee for the spanking she so desperately needs. Ashamed yet undeniably turned on, Daisy looks with different eyes at the man who has taken on the role of her strict but caring daddy.

Taming a girl as headstrong as Daisy will not be easy, however, and Shane's firm-handed correction will frequently be required to keep her in line. But when Daisy's past mistakes come back to haunt her and she deceives Shane about the situation, will he discover the truth and teach his little girl never to lie to her daddy again?