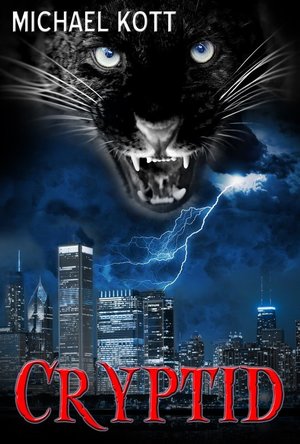 Cryptozoologist Mike Kellogg studies the creatures of folklore and legend: cryptids. Some are well known—Bigfoot, Loch Ness Monster—some are simply local myth. Still others are known animals mistaken for an unknown. The exhibit he and Liz Newcastle are currently involved with for his Chicago museum features melanism. What causes some animals to be born unnaturally black.
Sara Williams, orphaned from an auto accident, schemes to get Mike to adopt her so she can remain close to Emily Peters and Krystal Rogers, her best friends in Chicago, rather than move to southern Illinois and live with relations.
Hundreds of miles away, zoology student Xenia Sweet believes her research photographs show images of a melanistic jaguar roaming the National Forests of Arizona. Wild jaguars, spotted or black, no longer exist in North America. Or do they? Dale Marquez, a park ranger, who aids Xenia, finds the elusive creature may have lived in a remote, bone-littered, den under an abandoned railway boxcar, now headed to a railroad museum near Chicago. Xenia, plagued by a failed romance and past family problems, decides to go to Alton, Illinois, to make peace with her estranged sister, Pamela.
A week later, two lion-sized cats suddenly appear in Chicago’s downtown lakefront on the preview night of the melanism exhibit and an outdoor concert in Millennium Park. Are they Xenia’s jaguars from Arizona? An extinct American lion species? Could one be the fabled spotted Marozi lion from the Aberdare Mountains of Africa? Or are they simply some type of hybrids? In the midst of a thunderstorm, Xenia, with Pamela and Liz who have journeyed to Chicago with her, join Mike, Sara, Emily, Krystal and others, including the Chicago Police, in a race to find, identify, and capture the animals before they can spread havoc on the lakefront.

Images And Data Courtesy Of: Double I Publishing.
This content (including text, images, videos and other media) is published and used in accordance with Fair Use.