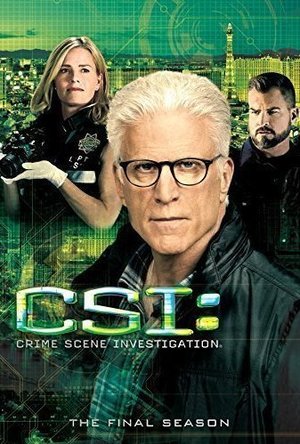 Finlay finds her car rigged to explode ("The CSI Effect") as Sara and Greg are quarantined ("Bad Blood") in the fifteenth and final season of CSI. As Russell and Finn are forced to embark on a hunt for the elusive Gig Harbor Killer, their team investigates a final series of gruesome and unusual cases, including a fatal shooting at a marijuana store ("Buzz Kill"), a chemistry experiment gone awry ("The Book of Shadows"), a death at a rehab ("Road to Recovery"), the world of rubber dolls ("Rubbery Homicide"), a murder at a jail ("Let's Make a Deal"), a victim who died twice ("Dead Rails"), and a case that leads the team into the world of aeronautics ("Angle of Attack"). Meanwhile, Morgan, Sara and Finn are met with a shootout at a forensics conference ("Girls Gone Wilder"), D.B. turns to Avery Ryan for advice on the psychology of killers ("The Twin Paradox"), and the CSIs reopen a ten-year-old investigation ("Dead Woods"). Also this season, a chrome-covered victim perplexes the investigators ("The Last Ride"), the abduction of two teenagers leads to a surprising offer for Nick ("Under My Skin"), murder memorabilia brings back bad memories of the team ("Merchants of Menace"), Stokes leaves Las Vegas, and Finlay is left comatose after coming face to face with the Gig Harbor Killer ("The End Game").