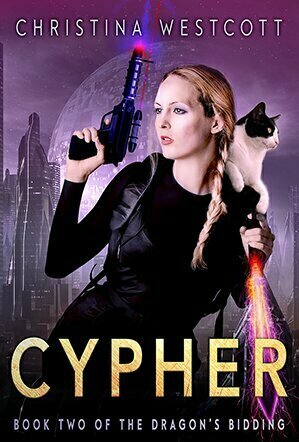 Colonel Kimber FitzWarren is settling into her challenging new position as head of Imperial Security. With an alien symbiont living inside her, giving her incredible healing powers, even immortality, she looks forward to spending eternity with her lover, ex-mercenary Wolf Youngblood. Their lives and the fortunes of the Empire are purring along like a well fed Kaphier cat, so they decide now would be a good time for Wolf to go into the operating tank to have his old augmentations updated.
And that’s when the gods of luck decide to bite them on the butt.
The man who awakes from surgery resembles Wolf, but behind those blue eyes, Fitz discovers the mind of a stranger. Their old enemy, Janos Tritico, has corrupted Cyber-Ops, slipping a rogue download into the internal computer that controls Wolf’s augmentations and turning him into a super assassin programmed to terminate the emperor and bring down the government. Only Fitz stands between her liege and the killer wearing her beloved’s face. She'll do her job, even if it breaks the heart in her armored chest.
Sometimes there is no happily ever after.