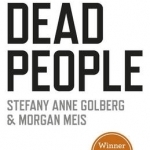 Dead People is a book of eulogies, written for an eclectic assortment of famous and interesting people who died in recent years. The essays were written by Stefany Anne Golberg and 2013 Whiting Award winner Morgan Meis. The book covers twenty-eight dead people in all, including intellectuals like Susan Sontag, Christopher Hitchens and Eric Hobsbawn; musicians like Sun Ra, MCA (Beastie Boys) and Kurt Cobain; writers like David Foster Wallace, John Updike and Tom Clancy; artists like Thomas Kinkade and Robert Rauschenberg; and controversial political figures like Osama bin Laden and Mikhail Kalashnikov.

Images And Data Courtesy Of: John Hunt Publishing.
This content (including text, images, videos and other media) is published and used in accordance with Fair Use.