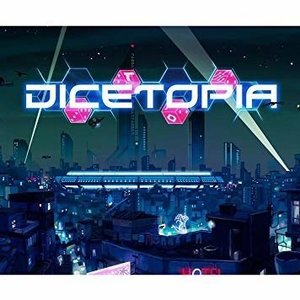 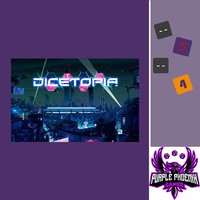 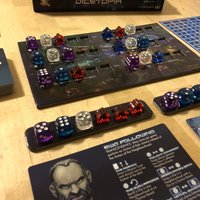 Ah, the neon-clad city of Dicetopia lies before you! A seething cauldron of petty thieves, devious corporations and ruthless smugglers. Or in other words, the city of opportunity for you and your factions highly questionable motives!

Unleash your agents to take over neighborhoods, snatch tasty loot, perform shifty actions and carry out sneaky missions. Be the unbridled predator, you’ve hopefully never dreamt of being in real life, and lay the city before your feet!

Dicetopia is a quick strategic board game for 2-4 players with a playtime of 20-30 minutes. The game introduces a fresh mix of area control, dice manipulation, worker placement and secret objectives. On players turn they will send out one of their agents to a neighbourhood in the city. This single move will determine the resource they’ll collect, their control of that neighbourhood, and what action they’ll perform.

When all agents has been deployed after 6 rounds, the ultimate goal is to score the highest points based on the neighbourhoods players dominates, the die resources they have, and from their secret missions.

The game has a randomized setup and comes with 10 different factions, 40 unique missions and 10 game changing scenarios to make sure no game ever feel the same!

Main Image Courtesy: All or None Games.
Background Image Courtesy: @purplephoenix.
This content (including text, images, videos and other media) is published and used in accordance with Fair Use.