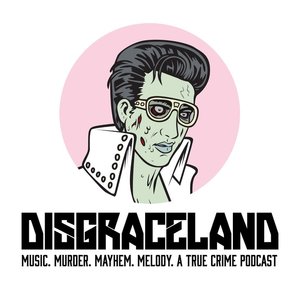 Disgraceland is a true crime podcast about musicians getting away with murder and behaving very badly. Thirty minute episodes that trace the most insane criminal stories surrounding our most interesting and infamous pop stars.

Season 1 of Disgraceland was released independently on February 13, 2018 and within two days reached #7 on the overall 'Top Podcasts' chart on Apple Podcasts. It has since been downloaded millions of times in over 150 countries.

Season 2 was released on July 10th, 2018 and continues to expand Disgraceland's audience.

Disgraceland is released on a bi-weekly schedule with a few exceptions.

Did Jerry Lee Lewis get away with murdering his fifth wife?

How did Sid Vicious and Sam Cooke really die?

Were Tay-K 47’s 100 million downloads aided and abetted by a murder charge and a nationwide manhunt?

Disgraceland explores these stories and more and attempts to reckon the heinous acts committed by these musicians with our love for the amazing music they create, which is particularly relevant in the here and now.

Disgraceland is a labor of love. It is produced independently. It began in a basement and graduated to a former massage parlor of ill repute, where it remains, fittingly.