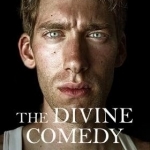 The Divine Comedy is a fugue and a black comedy. In delicious and bawdy detail, an unnamed narrator offers snapshots into the lives and loves of an astonishing cast of philanderers and fuckups while along the way, the evidence amasses for a comic, cosmic conspiracy. Craig Raine's second novel, The Divine Comedy, is a voyeuristic meditation on sex and insecurity, God and the nature of the human body - its capacity for pleasure and pain, its desires, disappointments, and its many mortifying betrayals.

Images And Data Courtesy Of: Atlantic Books.
This content (including text, images, videos and other media) is published and used in accordance with Fair Use.