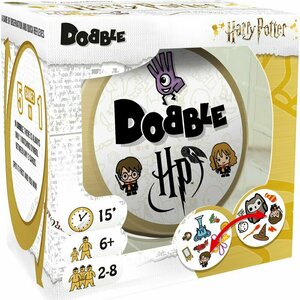 The wizarding world of Harry Potter meets the UK's smash-hit no.1 selling game Dobble. Can you spot the single matching magical image between two cards in a playful battle of speedy observation? Featuring stylised imagery of Harry Potter, Hermione Granger, Ron Weasley, wands, creatures, Hogwarts house crests and many more. In Harry Potter Dobble there is always only ever one matching symbol between any two cards. Spot it first and you win.

Main Image Courtesy: Asmodee.co.uk.
Images And Data Courtesy Of: Asmodee.
This content (including text, images, videos and other media) is published and used in accordance with Fair Use.