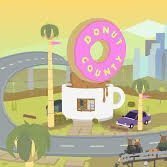 Donut County is an indie video game developed by American indie designer Ben Esposito and published by Annapurna Interactive. In the game, the player moves a hole to swallow objects, which makes the hole increase in size.
In Donut County, the players control a hole across several different levels, each of which is self contained but has several areas that open up as they progress. The goal of the game is to swallow every object to essentially clear out the level.