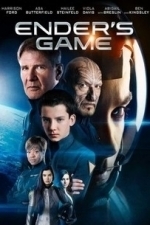 Young Ender Wiggin is recruited by the International Military to lead the fight against the Formics, a genocidal alien race which nearly annihilated the human race in a previous invasion.