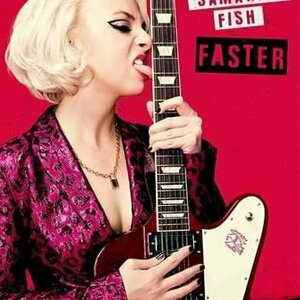 Samantha Fish has received practically every accolade a contemporary blues singer/songwriter/guitarist could hope for. She's a festival headliner with multiple Blues Music Awards, who has graced the cover of guitar magazines and toured internationally to packed houses. Fish commands her cathartic shows with her edgy vocal delivery and in-your-face slide guitar.

For her seventh album, Faster, she sought to expand her sound beyond trad blues-rock and capture the attitude and energy of her live performances. She crafted her strongest set of songs yet with the help of producer Martin Kierszenbaum, expanding her sound beyond her blues-rock comfort zone to encompass hard rock, electro pop, and retro soul.

Faster is an exciting departure for an artist who is just hitting her stride: she has captured her thrilling live sound on a collection of recordings that promises to break new ground and reach new fans around the world. Like the title song says, it'll make your heart beat faster.

Images And Data Courtesy Of: Rounder Records.
This content (including text, images, videos and other media) is published and used in accordance with Fair Use.