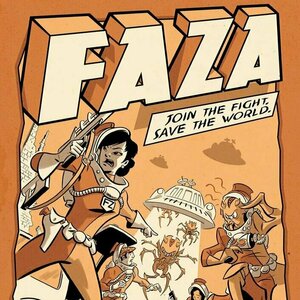 Faza is a cooperative science fiction board game for 1-4 players navigating a post-apocalyptic city. In order to save your city from the Faza, your extraterrestrial occupiers, your team will need to destroy their three motherships.

Your team, called Faction Zeta, has eight characters, possessing different skills within one of four areas of focus: tactical, medical, technological, and political. Faction Zeta will utilize the unique skills of each member to fight for final victory over the Faza.

As you move across the board, you will be combating enemy drones and recruiting Rebel Faza to attack each mothership. Naturally, over the course of the game, the Faza will be fighting back: dropping off more troops in attempts to overwhelm you, transforming the entire city to only be habitable to their kind, killing off the traitorous Rebel Faza to prevent you from attacking their motherships, and of course trying to kill you.

Note: Solo mode would require someone to control 2 characters in the game.