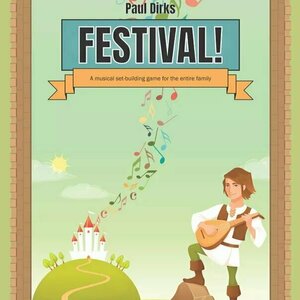 In days of yore, the dreariness and difficulty of daily living was interrupted by celebrations filled with feasting and festivity. Your goal is to collect cards and build sets of percussion and melodic instruments, female and male choirs, and to finish in first place at the yearly festival. Watch out for opponents stealing your performers and being left off the stage. Oh, and dragons.

Festival! is a musical, set-building game for the entire family. Like most Tamed Beast Games, it is a high-player count game, with up to 7 players.

In turn, players move one adjacent location on the map (Palace, City, Village, and Country) collecting Ensemble cards to form sets. Cards may be played and scored in the City, while Palace cards add bonuses and special powers. Four times per game there is a festival at which players may move onto a stage and get bonus Finale cards. The fourth festival signals the end of the game and the Festival Finale. Finale card points are added to points scored throughout the game and a winner declared. They are encouraged to sing a victory song.