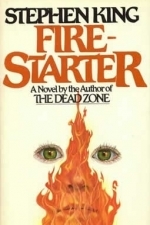 The Department of Scientific Intelligence (aka "The Shop") never anticipated that two participants in their research program would marry and have a child. Charlie McGee inherited pyrokinetic powers from her parents, who had been given a low-grade hallucinogen called "Lot Six" while at college. Now the government is trying to capture young Charlie and harness her powerful firestarting skills as a weapon.

Main Image Courtesy: Stephenking.com .
This content (including text, images, videos and other media) is published and used in accordance with Fair Use.