For This Knight Only 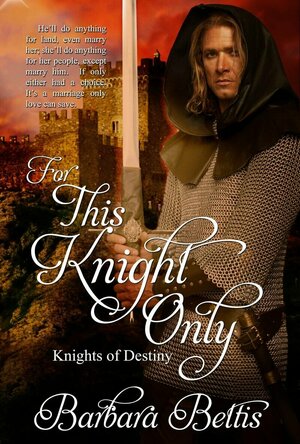 Sir Roark will do anything to gain land, even beguile an unwilling lady into marriage. He knows she’s much better off with a man to take control of her besieged castle, to say nothing of her desirable person. But it isn’t long before he discovers that, although her eyes sparkle like sunlight on sea waves, her stubbornness alone could have defeated Saladin.

Lady Alyss is determined to hold her family’s castle, protect her people, and preserve her freedom— until her brother’s dying wish binds her to a stranger. Still, she’ll allow no rugged, over-confident, appealing knight to usurp her authority, even if she must wed him. Especially since he thinks a lady’s duties begin and end with directing servants. Alyss has a few surprises for her new all-too-tempting lord.

But when a common enemy threatens everything, Roark and Alyss face a startling revelation. Without love, neither land nor freedom matters.

Main Image Courtesy: Amazon.
Images And Data Courtesy Of: The Wild Rose Press, Inc.
This content (including text, images, videos and other media) is published and used in accordance with Fair Use.