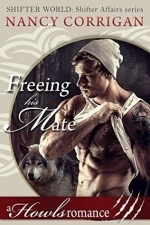 When you learn your true mate is trapped in a bond she never wanted, there’s only one thing to do – free her.

I swore I’d never rejoin Shifter Affairs. I was done with the bureaucracy and the rules that stopped me from exacting my own brand of justice. Then a promise to solve a cold murder pulls me right back in.

I shouldn’t complain. The case leads me to a skittish female who triggers every primitive instinct I possess. We click. Instantly. Just like it’s supposed to be between true mates.

I should walk away. Getting involved with Mya could cost me my head. My instincts won’t let me. Mya’s in trouble, forced into an abusive relationship for the babies she can conceive.

Not any longer. My true mate has a choice, even if the law says she doesn’t. And if it takes my death to free Mya, so be it.

This series is set in the same world as the Royal-Kagan series, but the stories focus on Shifter Affairs agents.