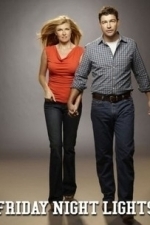 From Fandom Wika: The first season aired on NBC from October 3, 2006 - April 11, 2007. It centered around the Dillon Panthers and their new head coach Eric Taylor as they dealt with the pressure of high school football in Texas and the distractions that come on and off the field. The premiere season earned a Peabody Award for Area of Excellence, a Humanitas Prize, and a Television Critics Association Award, along with several technical Primetime Emmy Awards.