From the Double Gone Chapel by Two Lone Swordsmen 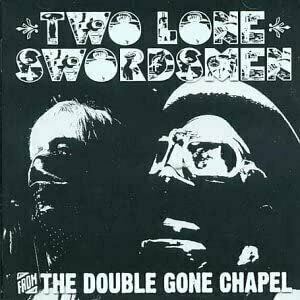 From the Double Gone Chapel is the creation of Two Lone Swordsmen Andrew Weatherall and Keith Tenniswood--collaborators since the mid 90s. Beginning with Sabres of Paradise they have developed a healthy back catalogue including their last studio album Tiny Reminders, which reinforced their style of electro-minimalism. Two Lone Swordsmen seem to form a patchwork of comparisons, with hints of the darker side of Depeche Mode, Cabaret Voltaire and some touches of B-Movie but still keeping an identity of their own.

The Double Gone Chapel is the sophisticated side of all these, with its post-punk electro-Goth touches that feel fresh but somewhat familiar and with a mix of instrumentals and vocal tracks. The latter include the dulcet tones of Weatherall himself working to great effect on "Sex Beat" and the crooner-styled "Kamanda's Response". This aside, the stronger elements of the album are the instrumentals, with the highlights being "Formica Fuego" and the hypnotic bass on "The Lurch", with its touches of nostalgia as it mixes old styles with new techniques. From the Double Gone Chapel is a stew that mixes its ingredients from a wide selection of musical styles and produces a great tasting dish. --Rob Holliday

Images And Data Courtesy Of: Warp.
This content (including text, images, videos and other media) is published and used in accordance with Fair Use.