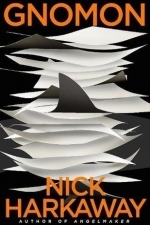 Near-future Britain is not just a nation under surveillance but one built on it: a radical experiment in personal transparency and ambient direct democracy. Every action is seen, every word is recorded. There is no Parliament; everyone votes.

Diana Hunter is a refusenik: a has-been cult novelist who lives in a house with its own Faraday Cage. No electronic signals can enter or leave. She runs a paper lending library and conducts business by barter. She is off the grid in a society where the grid is everything. Denounced, arrested, and interrogated by a machine that reads your life history from your brain, she then dies in custody.

Mielikki Neith is the investigator charged with discovering how this tragedy occurred. Neith is in many ways Hunter’s opposite. She is a woman in her prime, a stalwart advocate of the System and the justice and freedom it affords its citizens. It is the most democratic government the world has known, and Neith will protect it with her life.

When Neith opens the record of the interrogation, she finds not Hunter’s mind but four others, none of which can possibly be there: the banker Constantin Kyriakos, pursued by a ghostly shark that eats corporations; Athenaïs Karthagonensis, an alchemist and the jilted lover of Augustine of Hippo and mother to his dead son, kidnapped and required to perform an impossible miracle; Berihun Bekele, an artist who must escape a house fire by walking through walls – if only he can remember how; and Gnomon, a sociopathic human intelligence from a future so far distant that the end of the universe is an immediate concern, falling backwards in time to conduct four assassinations.

Aided – or perhaps opposed – by the pale and paradoxical Regno Lönnrot, Neith must work her way through the puzzles of her case and find the meaning of these impossible lives. Hunter has left her a message, but is it one she should heed, or a lie to lead her into catastrophe? And as the stories combine and the secrets and encryptions of Gnomon are revealed, the question becomes the most fundamental of all: who will live, and who will die?