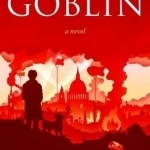 A novel set between the past and present with magical realist elements. Goblin is an outcast girl growing up in London during World War 2. Having been rejected by her mother, she leads a feral life with a gang of young children amidst the craters of London's Blitz.After witnessing a shocking event she increasingly takes refuge in a self-constructed but magical imaginary world. In 2011, a chance meeting and an unwanted phone call compels an elderly Goblin to return to London amidst the riots and face the ghosts of her past. Will she discover the truth buried deep in her fractured memory or retreat to the safety of near madness?In Goblin, debut novelist Dundas has constructed an utterly beguiling historical tale with an unforgettable female protagonist at its centre.