Granite Grit (Fighting's in the Blood #1) 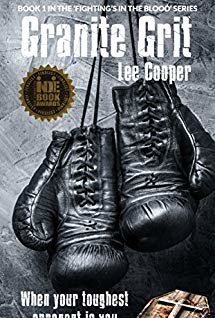 Young family man Joe is haunted by demons from a childhood blighted by his father, a notorious criminal and brutal street fighter. When he beat up Joe's mother, she killed herself, then the bully abandoned him.
When Joe loses his job and spirals into debt, he turns to what he knows: Boxing. He's forced into the clutches of criminal Mr Dean, and the brutal world of unlicensed bare knuckle fighting, relishing his bloody victories... until he realises he's becoming like his father he despises.
Joe is desperate to confront his father... and kill him. The only way is to defeat The Reaper, a psychopathic fighter and killer, to gain the notoriety to enter his father's murky world. Bur first, Joe must overcome his demons. Will he Win?

Main Image Courtesy: Feedaread.
This content (including text, images, videos and other media) is published and used in accordance with Fair Use.