Halloween Hoedowns Can be Deadly 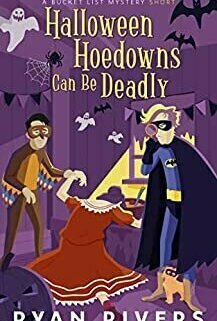 Spooky decorations. Murderous intentions. It’s not a party until someone ends up dead.
Bluebonnet Hills, Texas. Sho Tanaka can’t shake the feeling he's the odd man out. And being best buddies with a fading celebrity always seems to drop him in the midst of homegrown trouble. But when the suspended ICU nurse helps out at the local October festivities, he doesn’t expect to stumble over the librarian’s lifeless body.

Levi Blue is relishing his most demanding role to date. Faking it until he makes it as the interim mayor, the ex-TV tween detective is right on the job to hunt down a vicious murderer hiding among the boisterous crowds. But his script runs off the rails when the apparently deceased woman wanders back into the event… alive.

As Sho’s medical expertise is side-eyed by unamused partygoers, he dives deep to try to comprehend the bookish curator’s previous lack of pulse. And when a shocking turn disrupts the festive night, a gung-ho Levi partners with his reluctant sidekick and taps into his on-screen sleuthing skills to catch a creepy killer.

Can this not-so-dynamic duo solve another prickly puzzle in time for All Hallows’ Eve?

Halloween Hoedowns Can Be Deadly is a hilarious standalone short story in The Bucket List cozy mystery series. If you like colorful heroes, lighthearted humor, and twisty endings, then you’ll love Ryan Rivers’s small-town shenanigans.

Main Image Courtesy: Cover.
Images And Data Courtesy Of: Partners in Crime Press.
This content (including text, images, videos and other media) is published and used in accordance with Fair Use.