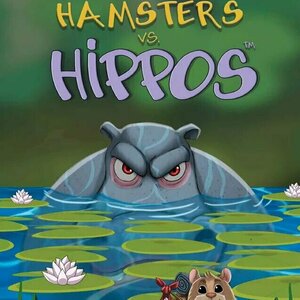 The hamsters have escaped their enclosure at the zoo and are making a run for it! Suddenly they come across a pond and see their most prized possession, the lily flower!

Unfortunately, lurking below the surface is a hippo waiting for his favorite snack. The hamsters have to take a risk and gather as many flowers as they can before all of the hippo's friends arrive to join in on the feast!

The game lasts 4 rounds with each player representing a little hamster. The player with the most flowers at the end of 4 rounds wins. Each round ends when hamster is eaten.

Each round, add another hippo card to the deck before shuffling and dealing the cards out. Since extra cards are placed to the side, the extra hippos may or may not be on the board.

The game goes 4 rounds, with the winner being the player with the most flowers collected during the game. If there is a tie after the 4th round, keep adding rounds (with the 4 hippo cards) until a winner is declared.

A round ends as soon as a hippo card is flipped. Any hamsters that are still on grid when this card is flipped, lose all the flowers that they collected that round. Shuffle the cards adding a hippo, then deal out the next pond to start the next round.

Taking turns, each player ventures out onto a lily pad, starting by moving onto any card along the edge of the grid.

Each turn, they must either move, or spend 2 flowers to peak under an un-flipped card. If they move, they must move onto an adjacent card (including diagonals). When landing on that card, they can collect any flower that is on top of it, and then must flip the card and perform the action (if any) underneath. If there are flowers underneath, they collect those too from the flower pile. Once a card has been flipped, a player can no longer step back on to it. Player can take up to 2 moves per turn, no including forced moves made from flipped cards.

Players can move off the board (from any lily pad on the edge) to safety during their turn. If they do so, they are out for the remainder of that round, but keep anything they collected in their permanent storage

Players can keep going until a hippo card is flipped, or until the last player has moved out of the pond