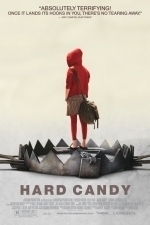 A fourteen-year-old girl goes to the home of a sexual predator, leading to her physical and psychological abuse of the pedophile as punishment for his misdeeds.