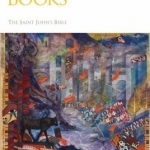 Historical Books is the sixth of seven full color reproduction books from The Saint John's Bible. Of al the different genres comprising the Bible, perhaps no other collection has caused as much discomfort within the reader as the historical books. The wars and bloodshed their stories contain have inspired pious and holy people to the greatest extremes of behavior, al in the name of following God's will. While Joshua, Judges, Samuel, Kings, Judith, and Esther contain many off-putting stories, they also have their share of inspirational passages; moreover, works such as Ruth and Tobit are both edifying and endearing. The historical books follow a trajectory that goes beyond the books themselves. A close reading of the text reveals that the winners, or God's people, are not necessarily painted in glowing terms, and the neighboring peoples are not always presented as evil. Here lies the key to the interpretation of the historical books. While many themes are evident throughout the historical books, it is quite possible that the most important is the understanding that God's history of dealing with people is not neat and tidy.

Humankind, left to its own devices, can spiral downward into moral abyss, even as we proclaim fidelity to the Lord. Because God's love is unwavering, we as people created by God have been spared the worst we could possibly do to ourselves and others. As the largest book in the series, Historical Books features more than twenty-five stunning illuminations as well as multiple text treatments and marginal details that dramatically depict the Bible's inspiring and thought-provoking passages. Through beautiful handwritten script and elegant design, this volume illustrates how the grace of God's justice and peace can rise from the most unlikely of places, reminding us that our redemption is always close at hand. Donald Jackson is one of the world's leading calligraphers and the artistic director and illuminator of The Saint John's Bible. He is a Senior Illuminator to the Queen of England's Crown Office and is an elected Fellow and past Chairman of the prestigious Society of Scribes and Illuminators. His 30-year retrospective exhibition, Painting with Words, premiered at the Minneapolis Institute of Arts in Minneapolis, Minnesota, in August,1988 and traveled to 13 museums and galleries.

The launch of a national museum tour of the The Saint John's Bible began at The Minneapolis Institute of Arts in Minneapolis, Minnesota in April 2005 where record crowds greeted the inaugural exhibit during its three-month run. The Saint John's Bible will continue its national exhibition tour that includes museums and galleries from throughout the United States and Europe.

Images And Data Courtesy Of: Liturgical Press.
This content (including text, images, videos and other media) is published and used in accordance with Fair Use.