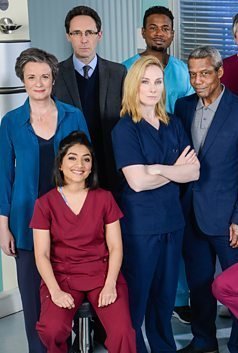 The series was created by Tony McHale and Mal Young as a spin-off from the established BBC medical drama Casualty, and premiered on 12 January 1999. It is set in the same hospital as Casualty, in the fictional city of Holby, and features occasional crossovers of characters and plots with both Casualty and the show's 2007 police procedural spin-off HolbyBlue. Its first executive producers were Young and Johnathan Young, who were succeeded by Kathleen Hutchison from 2002 to 2004, Richard Stokes from 2004 to 2006, McHale from 2006 to 2010, Belinda Campbell from 2010 to 2011, Johnathan Young from 2011 to 2013 and Oliver Kent from 2013 to 2017.

The show follows the lives of medical and ancillary staff at the fictional Holby City Hospital. It began with eleven main characters in its first series, all of whom have since left the show. New main characters have been both written in and out of the series since, with a core of around fifteen main actors employed on the serial at any given time. In casting the first series, Young sought out actors who were already well known in the television industry, something which has continued throughout the show's history, with cast members including Patsy Kensit, Jane Asher, Robert Powell, Ade Edmondson and John Michie.

Main Image Courtesy: BBC.
Images And Data Courtesy Of: BBC One.
This content (including text, images, videos and other media) is published and used in accordance with Fair Use.