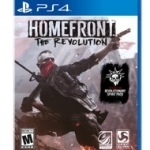 Homefront: The Revolution is a first-person shooter video game developed by Dambuster Studios and published by Deep Silver for Microsoft Windows, PlayStation 4 and Xbox One, with Linux and OS X releases to follow. It is the reboot to Homefront. Homefront: The Revolution takes place in 2029 in an alternate timeline, following the protagonist Ethan Brady as he stages a resistance movement against the army of a North Korean occupation in the city of Philadelphia.

Homefront: The Revolution received mixed reviews upon release, with critics mostly praising the open world and weapon customization system, while criticizing the narrative, characters, and gunplay, as well as the technical issues for hampering the overall experience.