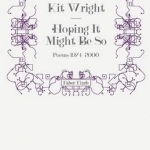 "Hoping It Might Be So" brings together all of Kit Wright's previous collections for adults as well as three dozen new poems. The collection, first published in 2000, was described by Christina Patterson in the "Sunday Times" as 'funny and profoundly humane' and by Sophie Hannah in the "PN Review" as 'full of verve and energy, with a strong musical quality that makes you want to read on and hear more'. Sean O'Brien in the "Times Literary Supplement" described Kit Wright as 'a masterly yet modest poet' while Ruth Padel in the "Independent on Sunday" said that 'all through his work there is that poignancy, darkness, brush with despair, which marks great comic work.' The poet Anthony Wilson said that Wright 'can be funny, serious and moving, and sometimes all three in the space of a single poem.' "Hoping It Might Be So" is a rewarding collection from an interesting, prolific and lively poet whose poems range from ribald to grief-stricken, elegiac to rambunctious.

Images And Data Courtesy Of: Faber & Faber.
This content (including text, images, videos and other media) is published and used in accordance with Fair Use.